As you May have noticed in spring we had a massive oil leak from one of our oldest tractors straight through the middle of our 10th green. As this was clean mineral oil from the hydraulic system it doesn’t show up on the green straight away and a couple of lines was expelled before noticed by staff.
Death of the turf occurs initially from the heat of the oil but the difficulty in recovery comes from the oil taking time to leach out of the soil and break down. Oil by its nature is a water repellent which is not good for water loving grass. 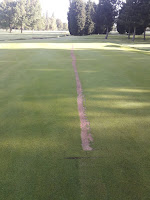 Unfortunately for the golf season turf was ordered but poor planning meant this died over a weekend!. My staff and I was left with a dilemma, wait to see if recovery started and over seeding actually started to germinate, or turf with a fresh piece of turf cannibalised from another green or the same green edges. We opted to try seeding but the seed just wouldn’t germinate in the hydrophobic soil profile caused by the oil, so our next step was to transfer turf from the outer edge of the green and introduce the edge into collar until established then creep it back into green later.

Firstly me and my deputy Adi Hankin measured the amount of turf needed and chose a relevant area of the green to use as the donor. Adi came up with a genius method of a flap for the turf cutter to enter the turf without damaging the surrounding area. 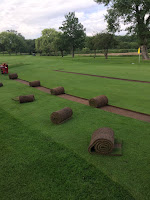 Both the damaged turf and donor area were stripped and rolled up. The areas were cultivated, left for any black layer (anaerobic bacteria producing sulphides) to oxygenate and turn brown then seaweed was added and profiles compacted, levelled and the turf rolls swapped over and rolled into place. The new turf was ironed and topdressed with sand, then brushed in and the old turf had the oil burn removed, rootzone added to level and seeded with a bent fescue type of grass that we soaked for three days in seaweed, fulvic acid, trichoderma fungus, bacillus bacteria and oxygenated water in order to pre-germinate.


The turf on the green is in play immediately so now you guys have more putting area and our team actually have somewhere put the hole which was becoming a task in its self.
I can only apologise for this work not being performed at an earlier date but that decision was out of this current teams hands, we got there eventually. ⛳️ 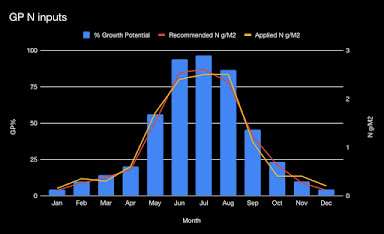 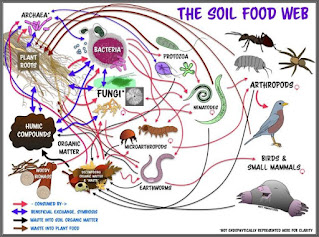 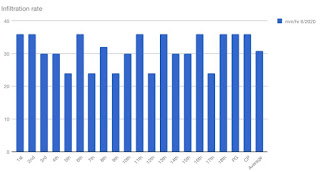